Don’t Freak Out – But You Need to See This Oncologist 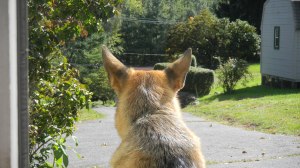 “Well, Eva, I don’t know what that is.” My ophthalmologist pronounced after peering in my left eye for several minutes, switching the light from bright white to blue and back, swiveling a giant apparatus around my head.

He was referring to a small blob of something that appeared on my left eye just next to the iris several months prior to this hot July 2nd Monday. At first it was just a clear nothing, I could barely see it and dismissed it as I did not want to be a hypochondriac running to the doctor with every little bump and scratch. However, in the next few months it started to grow a little and eventually changed from clear to opaque. Even though people insisted they couldn’t see it, I could tell they were lying to try and make me feel better.

“I am going to send you to someone who is very knowledgeable in these things.” Dr. N. said as he motioned for me to straighten up in the chair. He handed me a business card and while he scribbled in his chart, I looked at it. I scanned the card and my eyes focused on one word. Oncologist.

“Oh, don’t get freaked out”, Dr. N. insisted, “just because it says oncologist doesn’t mean your thing is cancer.” And smiled encouragingly. His eyes betrayed him.

“Dr. F. is an expert and an excellent surgeon. He will know exactly what to do. Call them today to set up an appointment”, he said closing my chart.

I stood up and walked out on wooden legs into the brightly lit hallway and out of the office. I stopped by the receptionist to ask if I owed them anything noticing that they only accepted checks as payment.

“We’ll bill your insurance first, don’t worry.” She said cheerily. I was glad, I could not remember the last time I wrote a check, in fact, I had no idea where my checkbook even was.

I drove home in silence, my thoughts swirling in panic, willing myself to pay attention to the red lights and passing traffic. I was able to make it through the front door of our apartment before my eyes filled with tears. In a flash of despair, I considered calling my boyfriend, my friends, my co-workers, anyone who would listen to my hysterical wails. Instead, I dialed the number on the business card and the phone was swiftly answered. I stuttered explaining what I wanted, sucking back the tears and trying to sound normal. The person on the other end already knew.

I swallowed hard. The doctor called them and I can come in tomorrow already? Is it really that bad? I mean, this guy is supposed to be a top of the line of the specialists and he has a slot for me tomorrow?

I accepted the appointment and was barely able to say good-bye before I burst in tears again. I have cancer in my EYE? In my eye? Why? I always wore sunglasses. I never laid out in the sun. I never got sunburned. Why, goddamned?

The next day, I got out of the elevator on the 5th floor of one of the buildings on 61st street and Park Avenue. Dr. F.’s office door had the old timey non-see through glass pane. The black letters on the door screamed back at me: The Eye Cancer Institute. I stepped in the waiting room, signed at the receptionist and sat down. The room was filled with old people, some wearing sunglasses, some wiping their eyes, some just staring in front of themselves. They all eyed me curiously. I distracted myself by reading all the plaques and diplomas Dr. F. had on display there including several patents.  It was 11 AM. I was not going to leave this office until 4:30 PM.