Side Effects: Somebody Must Want You Up There 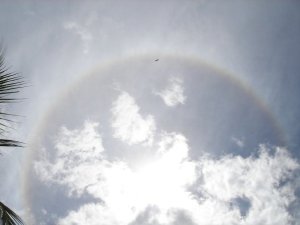 “Somebody must really want you up there.” Said my cab driver as he looked upwards and rolled his eyes towards the sky.

I tried to smile politely meeting his eyes for a microsecond in the rearview mirror. I was on the way home from the hospital, just having received a white blood cell forming booster shot that would cost $8,000 if I didn’t have health insurance. I shivered with waves of chills caused by the fever that enveloped my body that morning. A whole 24 hours earlier than expected. My stomach felt like there was a bowling ball rolling around haphazardly. My head buzzed, my throat was starting to hurt and I knew it was only going to get worse.

“You know, years ago, people would just die”, my cab driver continued, “but nowadays we have all these drugs and surgeries…” His voice trailed off and he looked at me again in the rearview mirror expectantly.

I thought that answering his questions early on would keep him quiet for the rest of the way. I thought that telling him about my two cancers that I got within one year would shock him into silence. I thought that the scarf covering my bald head would make him talk about anything BUT cancer.

I crossed my arms over my torso, desperate to warm up, watching the meter tick up and up, fifty cents at a time. I willed the car to go faster, glide over the backed up traffic, so that I can burrow in my bed, cover myself with my heavy blanket, finally be warm, and let the fever boil my brain if necessary.

I knew I was in for a really bad weekend. Side effects this early have not happened to me the whole time since my boobs got cut off and my hair fell out with no mercy. I still remembered the day I shaved my head, 2 months ago.

Back then, I was glad to get rid of my thinning hair, glad to stop looking like an old man with a really bad comb-over. I stood in the shower the morning before my husband and I shaved my head, and I knew I was lathering up the remaining tufts of my hair for the last time. I wondered when I would ever wash my hair again, if ever. As I rinsed the shampoo, I felt the clumps of my hair sliding down my soapy legs like on a waterslide. Except no one was shouting for joy or lifting their arms up in the air to show courage.

“You are so brave.” People at my work would say. No, I am not! I screamed in my head. I am a coward through and through. I cry, I whine, I complain, I get angry and I have meltdowns. I am not brave and I don’t want to be. It’s too much work. It was already hard enough to repeat my story in various doctor’s offices or to people I randomly met. I even cried at the acupuncturist. Her calm demeanor and her soothing voice pushed me over the carefully built edge. She was clearly uncomfortable. I never went back.

As I sat on the stool and my husband buzzed my head, I did not cry. I just wanted it to be over. Just do it. Get rid of it. I hated this hair that suddenly didn’t want to stay on my head. “See ya!” My hair called over its shoulders and was gone. The little annoying voice in my head started squeaking: “You lost your breasts, now you lose your hair. You can’t wear make up because you had cancer on your eye. Try looking feminine now,” I heard her voice snidely whisper.

“Is your place going to be on the left or on the right?” The cab driver brought me back from my reverie.

“Oh, it will be on the right,” I said, peeling my head away from the window. I left a visible imprint of my forehead on it. As I got out of the cab, I shivered uncontrollably in the November wind.

My husband was gone on an overseas tour for his job and my friend coming up to help me was not due for another couple hours. My dog greeted me at the apartment door, wagging her tail so happily, so blissfully unaware of my condition. I knew I had to take her out so I put a fleece cap on my head and pulled another, heavier one over it. I pulled out my gloves and a jacket, both designed for subzero temperatures and finally felt a temporary relief from the chills.

Coming down the stairs I felt my muscles starting to ache and I felt the vertigo spinning my world around and around. Like when I was a kid and we played the game where each of us would spin around a short pole in the ground, bent over at the waist, holding on to the pole with one hand. Then we would straighten up, all dizzy and laughing hysterically and tried to complete some silly task like walking in a straight line or picking little flags off a nearby tree branch. Only this time I wasn’t laughing because I knew I was going to feel like this for the next seven days.

Back at home, I poured Sunny’s food in the bowl. She smelled it and walked away. Bleary eyed I looked around the kitchen and imagined a kettle getting filled, hot tea being prepared with lots of lemon, and a piece of crunchy bread smeared with some delicious spread. My body felt like it weighed 100 tons, so I swept the kitchen with my eyes again and instead of fulfilling my fantasy, laid down on the couch and covered myself up to my ears with a blanket. Soon after I settled, my phone chirped with a text from my friend that she arrived and is on her way over in a cab.