Five Days with Me, Myself and My Sewn Shut Eye

Almost exactly a year ago, I was healed from my eye cancer surgery and the subsequent chemo drops that ate away at my eyeball, and I was planning our trip to France. However, the Tuesday before our departure for the city of love, I had to go for another checkup with my eye surgeon. I strolled through the Manhattan streets, enjoying the nice weather. I walked in the doctor’s building with a spring in my step and settled in the waiting room.

As I was mentally visiting Champs-Elysees and choosing in which café to order deux cafes et une grande bouteille d’eau minerale, I heard my name called. I looked up and the doctor was beckoning me into the exam room. I urged him to hurry up in my head so I could continue my French reverie.

I knew something was wrong when he kept looking at my bad eye over and over again, switching on different lights and checking my previous eye photos on his big TV screen on the wall.

“Something’s growing back.” He said bluntly. “Right here.” And he pointed with his mouse on the freshly taken photo of my eyeball. I saw it. The faint opaque shadow in exactly the same spot where my cancer was not even a year ago.

He looked straight at me and his shoulders slumped. He sighed. His eyes were sad. I felt the exam chair melting away from underneath me and the room started to spin a little. This couldn’t be true. I was going to Paris and then I was getting married, damned! My brain attempted to quickly put up a big wall of denial. It crumbled just as quickly and panic set in. Was I going to lose my eye this time?

“I am going to scrape it for biopsy.” The doctor said and proceeded to scratch at my cornea with a tiny scalpel.

A week later, while I was in France, I found out for sure that the cancer was back. As if the trip (you can read about it here) couldn’t get any worse.

The treatment consisted of doing a so-called eye plaque. Eye plaque was a small gold cap, filled with radioactive particles that got sewn on the eye and was left there for five to seven days. This is what it looked like: 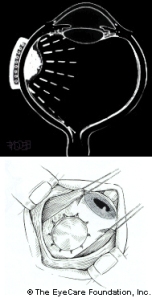 The surgeries were scheduled for May 17 and May 22. I was getting married on June 1st. I cried for several days knowing that I would barely be able to get through the wedding day due to the pain from the surgeries. I also knew that any photos taken that day were going to capture my blood red and dilated eye. I received a heavy led container into which I was supposed to put the cap in case it fell off my eye. My fiance and my dog had to stay at least five feet away from me at all times. I wasn’t allowed to leave the house.

When I woke up from the first surgery, I felt OK but found a big grey led patch over my eye to prevent the radiation from going elsewhere on my body. When the time came to put the first set of drops in, I realized my eyelids were sewn shut except for a small opening in the inner corner of my eye. It was almost impossible to get the drops in there.

Then the five day purgatory began. I spent the day lying in bed, feeling like someone was stabbing me through my eyeball straight into my brain. It was a constant, unrelenting, pushy headache that made even talking painful. It was an epic pain that went unaffected by any medications I had. Reading or watching TV was out of the question because the smallest amount of light made my eyes water and my nose run.

So I just lay there and found that one can really waste some time wondering around his or her own head. I thought about my bad PET scan I had only a few weeks prior and how “…there was something in my left breast”. I lay there thinking about how unfair it was if I had another cancer. I lay there, my heart squeezed in an iron band of fear that wrapped around my torso. My stomach felt hollow with despair. I had a hard time justifying any meaning of life.

These states of depression alternated with violent outbursts of anger – all in my head since any movement made the headache so painful I considered finishing off my bottle of prescription strength Tylenol. The anger ate me away, made me cry and made me sweat. How dare this life give me two cancers in the same year? This was bullshit! I didn’t deserve this. Why should my life be so screwed? I dreamed about smashing porcelain dishes, boxing into a saw dust filled bag, yelling at the top of my lungs, stomping my feet. But all I could do was lay there and take it.

By day three, I felt like a beaten down dog that just notices as the sun travels across the ceiling and illuminates different windows of the room. I forced myself to at least drink some water and eat here and there. The bedroom was hot because we had not installed our AC units for the summer yet, so I lay on top of my covers, arms and legs spread to keep cool. The headache was so intense I felt waves of nausea and fear rising from my feet up through my body. I counted the hours. I tried to not move my eyes at all.

In the end I brought my tablet, laid it on the bed next to me and listened to all the episodes of Desperate Housewives. I couldn’t watch it. Even when I turned the brightness all the way down, the glow was unbearable.

Finally, the day of the removal came. I dreaded the car ride to the hospital with the brightness of the windshield and the bumpiness of the road. The surgery was delayed and as I sat in the waiting room near the OR, dressed in my customary cotton gown and sticky socks, my headache intensified because I shivered from cold. Finally, they called me.

I marched through a narrow hallway and saw my surgeon and his crew lined up outside of the operating room. They were all in blue scrubs, their face masks hanging off one side of their face, watching me approach. I was holding the led container and as I approached them I extended my hand.

“Do you want this?” I asked my surgeon.

As I lay on the operating table I stressed the fact that I get sick from anesthesia. The surgeon informed me that they were not going to put me under. WHAT? My good eye stared at him in alarm.

“What do you mean, you are not putting me under?” My voice trembled. “You are just going to cut it off when I am all alive?”

The surgeon laughed. “Well, we certainly want you alive, but you will just be mildly sedated.”

I wanted to take back my nausea rant. I imagined the surgeon cutting at my eye as I was watching it, unable to move but feeling all the pain. And then I was out.

I woke up in the recovery room, the eye patched up with gauze again. I had no headache, presumably because of the sedative. It was over. I felt immense relief. For about 15 seconds. Then my anxiety returned. Now what? Was the cancer going to come back AGAIN?

As the days post surgery turned into weeks and months, my anxiety about the eye faded. Or it could have been because I was plunged into the whole breast cancer adventure. Either way, I should find out in about a month. I am going back to NYC to get my eye checked out again. Keep your fingers crossed for me.