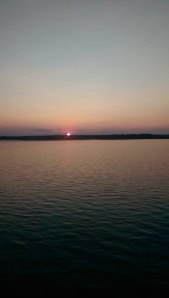 I am a skeptic. I am an atheist. I don’t believe in spiritual things or cosmic conscience. So when I rode the subway to my first reiki appointment, I kept berating myself for wasting my time and money.

Reiki is described as an ancient Japanese relaxation technique that employs light touch and adjusts your life force energy.

Being who I am, I smirked and dismissed it for years. Only upon the insistence of my naturopath and because of the black hole the anxiety was pulling me towards, I gave in and decided to give it a try.

I was ushered into a dimly lit room and the therapist talked to me for about 15 minutes about my issues. We narrowed it down to a fear of cancer re-occurrence and overall super-sensitivity to all things sad or difficult.

Then I lay down on a massage like table that was heated and she covered me with a cotton sheet. I was wearing all my clothes underneath. Soft soothing music played without any harsh instruments like the violins that can produce annoyingly whining and sharp notes.

I closed my eyes. The therapist laid her hands on my clavicles and started reciting mantras for relaxation. She then laid her hands over my ears, my forehead and my scalp. Each position was held for several minutes. At the same time I was instructed to try and breathe slowly and concentrate on the breath depth and speed.

Despite myself, I started feeling good. I felt like I was in that no man’s land between being awake and being asleep. And yet, I wasn’t sleeping, I heard every word the therapist said.

She then laid her hands on my stomach, slid them underneath my lower back, top of my thighs, shins and feet. Then she held my hand in both of hers which had a strange grounding effect but at the same time I felt like my bed was spinning in circles.

She finished back at my head. I had a hard time emerging from the soft cloud that my brain was cradled in. I held my eyes closed for a little longer as she talked me back to reality.

During the session, she used biofeedback and measured my pulse which dropped dramatically after the first 15 minutes. It remained low for the rest of the session.

I rode the subway home and all the sounds felt muted, softer, calmer.

Reiki worked for me. I went back again and the experience was the same. I may have found my anxiety’s Achilles’ heel.