“You Have Giraffe Eyelashes” 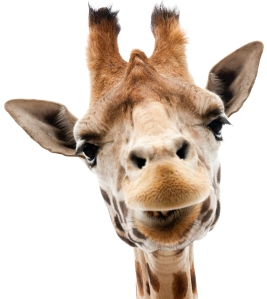 I hate the smell of acacia in the morning. Or it may be a different tree, different flower. But its smell causes pangs in my stomach because it blooms in late May and early June and reminds me of when I was a kid and used to walk to school terrified of the final exams.

Though years out of school, I felt the same pangs in my stomach this past Tuesday. It was 6:30AM and I walked to the metro to get to the Union Station and catch an Acela Express to New York City. My four month eye cancer check up was glimmering in the distance like a mirage.

It was so hot and humid that morning that I sweated despite wearing short sleeves and only walking less than a mile. I stood on the subway platform, an alien in jeans among the suited and crisp nine to fivers. I felt my fear of the upcoming doctor’s appointment creep up from my toes to my fingertips.

I tried to distract myself with watching people on the subway. I focused on one prim looking lady who wore a short skirt but sat with her knees at least a foot apart. I wondered what kind of view had the passenger directly in front of her.

At the Union Station, the Acela Express train was business class only so there was enough room for my 5’9” body. My joy was short lived. The man in front of me reclined his seat at least 10 inches. This was going to be a 2.5 hour ride. Did he really need to put his seat down? To make myself feel better, I passively aggressively bumped into his seat a few times on purpose.

I pulled out my cleverly packed sweater because the train was chilled to a degree in which my fellow passengers would be able to place their phone calls and type on their laptops without breaking a sweat. I was lulled by the train’s hum and the buzz of the words around me: “…blow the concept out”, “…I am booked solid through July”, “…is stuck in traffic so let’s start without him”, “…no, no, no, I said to send it to them now”, “…can you hear me, I am sorry, I was in a tunnel”. Various cell phone ringers chimed in the air, heads were scratched and legs were crossed and uncrossed.

About an hour and a half into the trip I was so cold I decided I needed to get hot tea in the café car. I looked at the young man sleeping next to me. He was pretty short, so there was just enough room between his knees and the seat in front of him for me to get by. I got up and as I squeezed myself in front of him, I hoped he wasn’t going to wake up right when my behind was at his eye level. I hopped into the isle and spun around. He was still asleep.

I got my hot tea and poured in three packets of white sugar and two ‘half and half’ containers of something fake that didn’t need to be refrigerated.

“So what.” I thought to myself. “I’ll probably get bad news in NY anyway, what’s a little bit of white sugar going to do to me now.” I stumbled back to my seat, once slamming into the wall after an unexpected jerk of the train.

We pulled in the Penn Station in NYC four minutes ahead of time. I merged into the crowds and they spit me out on 7th Avenue. I walked over to where I thought the N,Q,R subway stop was. It wasn’t there. I walked a couple streets in the other direction. Nothing. To my disgust, I had to pull out the NYC metro map. God, I felt stupid.

About twenty minutes later, I stood in front of the East 61st Street building and took a deep breath. I looked at the sky and wondered how I would feel next time I saw it.

I got out on the 5th floor and walked through a door labeled The New York Eye Cancer Center. It had been almost two years since I stood there for the first time. The effect was always the same. My heart galloped in my chest, my shirt got soaked in my armpits, I panted like a dog and my stomach transformed itself into a corkscrew. My hands started to shake.

I settled in the waiting room. There was a middle aged lady with short grey buzz cut and an old man with sad eyes. The lady sat twisted in her seat so she could face him and rattled off:

“…so then I came back for another check up and he said that it was definitely cancer, so I was like, what were we gonna do now, and he said he was going to put the eye plaque on my eye, so then I was like an inmate in a correctional facility…” She chuckled at her clever joke and continued. “I mean, you know, it’s radioactive, so my husband and my kids had to stay away at least six feet and I couldn’t go anywhere. I mean, I was like in a prison!” And she laughed again.

I thought: “God, lady, shut the fuck up, where would you want to go anyway with a sewn shut eye?”

She kept yammering about her subsequent treatment and every single appointment since then. Even though I was irritated, her rants passed my time and it took the focus away from my own mind.

“Eva?” I heard Dr. C. call. She was an Asian lady with hair down to her shoulders and that day she did not seem in a hurry as usual.

I sat in the eye exam chair and obediently put my head in the chin and forehead stirrup. She shun bright lights in both of my eyes and started taking pictures. When I thought that she permanently deleted anything in my frontal lobe with the flash of her camera, the photo shoot concluded.

She clicked with the mouse a few times and my eyeball snapshots popped up on the wall mounted monitor. “Eww”, I thought,”My eye looked gross.” Red and irritated from the eye drops and the flash, straining to the left or to the right as per the orders.

“Well, it looks pretty good so far.” Dr. C. stated. “But Dr. F will have to look at it and then I am sure he will want to do an ultrasound too.” My hands stopped shaking and my heart slowed down a little.

About ten minutes later, I was in another exam chair, this time reclining all the way down, with a plastic cup jammed in my eyeball and water solution being poured into the cup. Directly on top of my exposed eye. I called this the the eye water boarding.

“You have these giraffe eyelashes”, Dr. F. remarked, “they keep getting in the way.” He continued as the water dribbled from the eye cup down my temple and under my shirt. I guess I took it as a compliment given the fact that half my eyelashes fell out because of my breast cancer chemo.

When the side of my head was thoroughly soaked and the ultrasound exam was over, Dr. F. confirmed my good news that there was no evidence of the tumors on or inside my eye. I started breathing normally and stopped sweating. My stomach loosened up.

Was this it? I really got good news? My limbs felt rubbery as I walked back out into the waiting room and saw the annoying middle aged lady, still talking. This time to another victim. I smiled at her and walked out the door.

I made it back to the Penn Station in time to change my ticket to an hour earlier train. I did not eat anything all day except for the chemical spiked hot tea so I walked over to a falafel kiosk. Since my eyes were still dilated, I couldn’t read any of the menus. I blindly ordered a wrap with falafel and lettuce, bottle of water, paid $12 and went to the Amtrak waiting room.

After I took several bites of the not so appetizing wrap, I started feeling very sick to my stomach. My jaws clenched. I felt drool collect in my mouth. Oh god. I panicked. Where was there a restroom? What if I don’t make it there on time? I shifted in my seat. Beads of sweat appeared on my forehead. I really didn’t feel good.

I heard a slight rustle. I reached in my jeans back pocket and found a green doggie poop bag I stuck in there that morning when I took my dog out. Well, I thought, in the worst case, I could throw up in there. I saw a lady who sat in front of me watching me. I couldn’t make out the expression of her face. Everything was still blurry. I sat there for another twenty minutes, concentrating on breathing and drinking water. The nausea slowly passed. I threw away the remaining falafel and boarded the train.

I froze on the way back to Washington again but managed without the chemical tea. When I got out at the Union Station, for the first time in almost a year, I felt wind in my hair. It was actually long enough to move in the breeze.